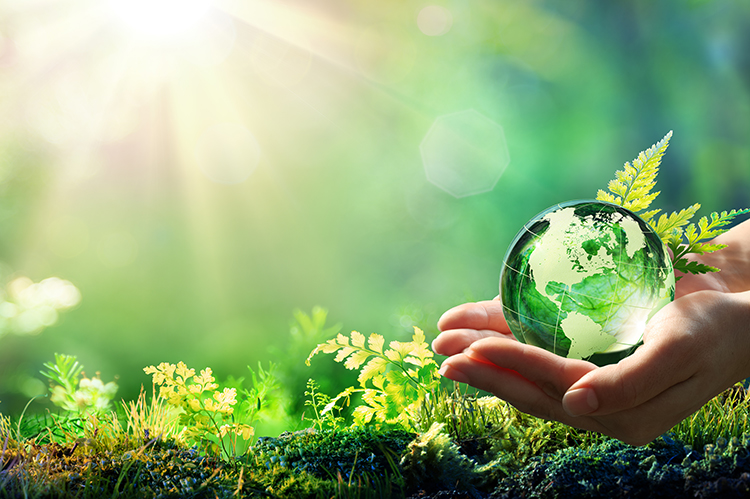 College of the Canyons has a long history of embracing sustainable technologies that are friendly to the environment, as well as cost- and energy-efficient. 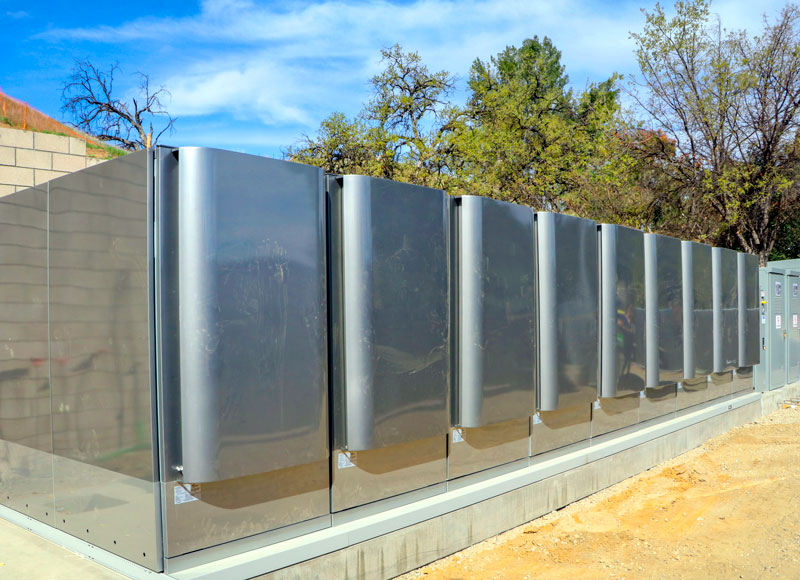 A fuel cell/battery storage plant with 1.5 megawatts of capacity increases our overall on-site power generation to 70 percent, significantly reducing the college's dependence on the power grid and bringing the college one step closer to energy independence. The plant also has enough reserve capacity to power the entire campus. Funded by a $3 million award from the South Coast Air Quality Management District (SCAQMD), the plant went online in 2020. 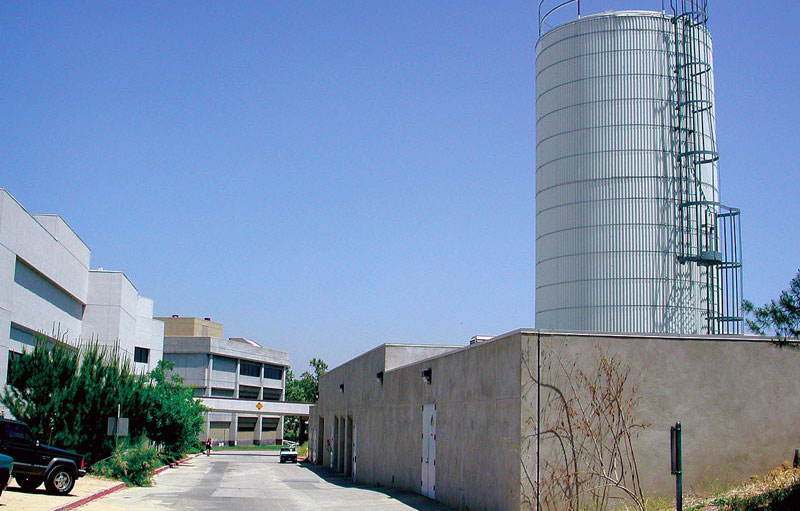 A central plant is a facility housing chillers, boilers and cooling towers. It serves as a single source of hot water (heating both air and potable water) and chilled water (for cooling air) that supplies multiple buildings from a central location, all controlled by a sophisticated computer system that continually and automatically adjusts its controls to provide the highest possible levels of energy efficiency. Most new buildings provide heating, cooling and hot water sufficient to supply just that building and allow individual control of the systems. This is a tremendous waste of natural resources, as the efficiency of a per-building approach is much less than a single, larger facility that can serve several buildings simultaneously. When a campus becomes a conglomeration of numerous and varied buildings encompassing hundreds of thousands of square feet, the combined inefficiencies and waste of separate systems is enormous. This has never been the case at College of the Canyons.

College of the Canyons actually began life with a central plant concept. The first such installation was, and still is, on the roof of Bonelli Hall. It serves the Laboratory (Boykin Hall), Instructional (Bonelli Hall) and Classroom (Seco Hall) buildings. As the campus began its expansion in the early 1990s, Superintendent-President Dr. Dianne Van Hook began applying for funds for the first major central plant, the South Plant, located just east of Mentry Hall. Even though the idea was unpopular with the state, and the Department of Finance saw no benefit in funding such a project, Van Hook obtained the money to build the first genuine central plant in the California community college system.

The college completed a remodeling of the Bonelli Hall plant, a remodeling and expansion of the South Plant, and added the North Plant. Together, these three plants serve all buildings on the campus – and they boast enough reserve capacity for the buildout of this college. As a leader in the community college system, College of the Canyons also has added cogeneration to the North and South Plants. Cogeneration is a process in which electrical power is created via natural gas-fired generators. The waste heat from the exhaust is used to produce both hot and cold water for normal central plant functions. This not only allows the college to cut power costs dramatically, it also reduces its reliance on the public energy grid. With the systems reaching an efficiency in the 90 percent range of every therm of natural gas used, the college is saving large amounts of natural resources and contributing significantly to the conservation of precious resources.

These projects are so efficient that the college has received substantial rebates – in the neighborhood of $1 million – from the power and gas utilities. The rebates were made possible by a program developed by the California community college system, which has been recognized by the American Council for an Energy-Efficient Economy for its “exemplary energy efficient program and for displaying national leadership in this area.” College of the Canyons is proud to be one of the largest beneficiaries of the statewide program and to have been recognized where it counts – the pocketbook – by Southern California Gas and Southern California Edison for success in creating projects that will save, and continue saving for decades to come, our environment and natural resources. 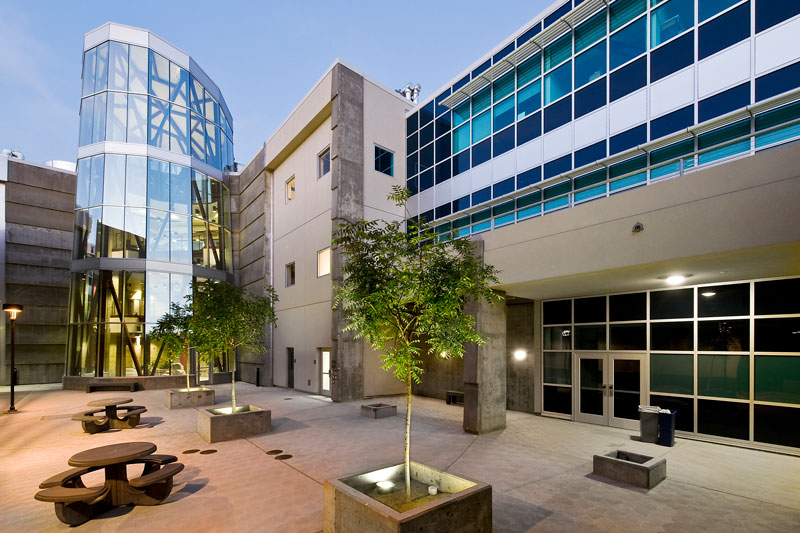 Placing a building in the correct orientation of the sun’s path is a simple and effective way of reducing the potential heat demand of that building on its cooling systems. Whenever possible, the college has put its largest glass "fronts" facing east or north, allowing the full benefit of natural lighting without the potential overload of the late afternoon sun. The Library, Pico Canyon Hall, the Performing Arts Center, and the Hasley Hall tower all share this concept and implementation. In addition, the college has employed overhangs and tinted glass, which is always the most efficient glass available, at the time of construction. What one won’t find on the campus but on others with more moderate climes are operable windows, which are counterproductive in the Santa Clarita Valley.

Together, these electricity-saving measures contribute significantly to reducing the college’s overall energy consumption: 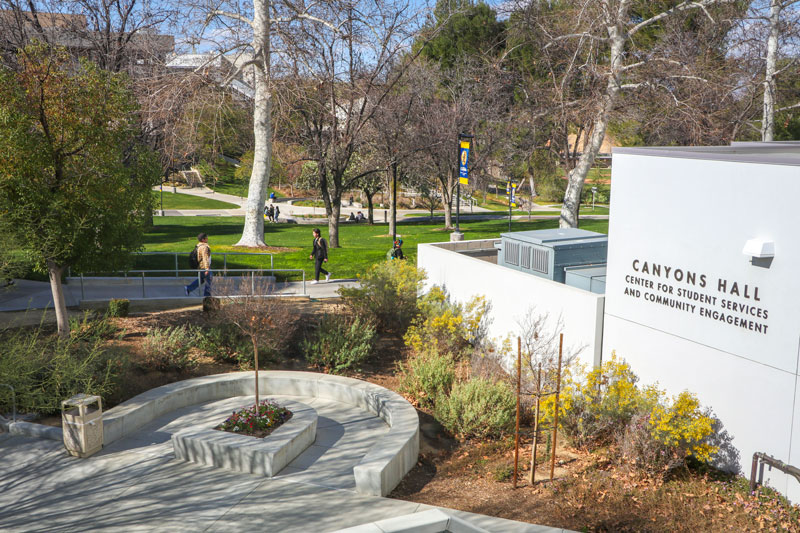 In short, College of the Canyons has made substantial progress toward maximum sustainability, long before it became popular to do so. While other districts take great pride in publicizing their LEED (Leadership in Energy and Environmental Design) and “green” buildings, College of the Canyons believes other priorities take precedence. It takes a tremendous amount of money to certify and commission projects to the differing levels of sustainability, and the college would rather spend its finite dollars on serving the needs of its students. The college is more than pleased with its sustainability program and its results, more so than garnering attention for its efforts.