As part of its 50th Anniversary year of service to the Santa Clarita Valley, College of the Canyons welcomes the community to a special Homecoming Celebration on Saturday, Sept. 28 at Cougar Stadium.

Festivities begin at 4 p.m., with kickoff for the game against Cerritos College scheduled at 6 p.m. Admission and parking are both free for this event.

All Cougars fans and community members are invited to enjoy a variety of pre-game activities including:

The celebration will culminate with a special on-field halftime recognition and group photo, with all College of the Canyons students and alumni invited to participate. Photo participants will be asked to make their way down to the field level beginning midway through the second quarter on the night of the event.

The date of the 50th Anniversary Homecoming Celebration event also coincides with two major milestones in the college’s illustrious history.

College of the Canyons officially opened to students on Sept. 29, 1969, though in temporary facilities at nearby by William S. Hart High School. A class of nearly 750 students enrolled in the more than 150 academic courses offered that first year.

Homecoming week also marks the 45th anniversary of Cougar Stadium, which officially opened on Sept. 21, 1974 for the football team’s first home game of the season. That night, COC quarterback Chuck Lyon — who would go on to lead the Cougars to a National Championship as the program’s head coach in 2004 — scored the first touchdown in Cougar Stadium history. However, it would not be enough as COC was defeated 26-21 by visiting L.A. Harbor College.

“I can think of no better venue to help kick start the college’s 50th Anniversary celebration, than under the lights at Cougar Stadium,” said Lyon, who currently serves as Dean of the college’s School of Physical Education & Kinesiology. “I invite the entire community to come out and enjoy a night of Cougars football and good old fashioned family fun.” 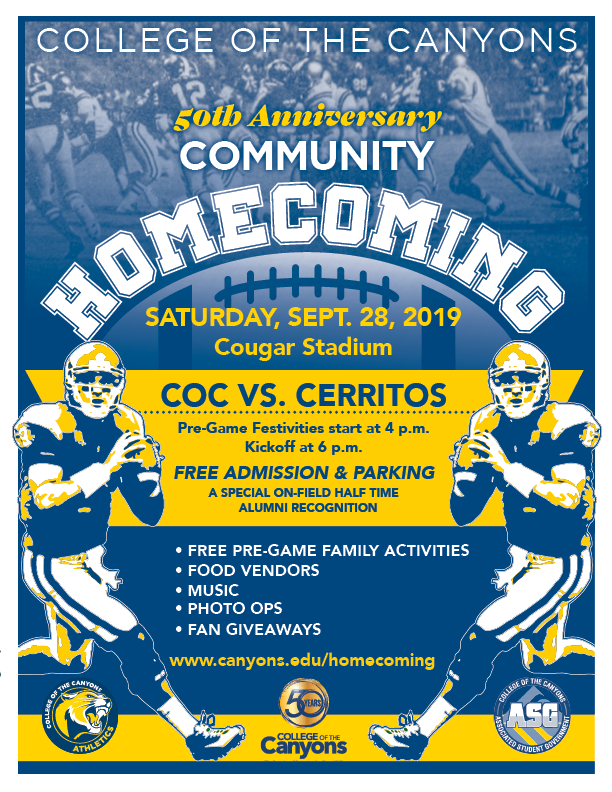