Legendary longtime College of the Canyons baseball head coach Mike Gillespie, who launched the Cougars baseball program and led the program to three state titles before winning an NCAA National Championship with USC and later re-establishing the baseball program at UC Irvine, died on July 29, 2020. He was 80.

Gillespie, who also taught English, physical education and health sciences at COC, guided the Cougars on the diamond for 16 seasons (1971-1986). He also served as the college's athletic director from 1977 to 1986, and was a quarterback coach in the early days of COC's football program.

Affectionately referred to as "Skip," Gillespie's respect for the game, baseball acumen, and attention to detail drew the love and respect of his college baseball peers, former players, students and faculty colleagues alike, and also proved to be a winning combination on the field.

"He was like my second dad, truly a mentor and a friend," said Chuck Lyon, dean of physical education & kinesiology and athletics, who played under Gillespie as a dual-sport athlete at COC in the 1970s, winning two conference titles as a member of the Cougars' baseball program in 1973 and 1974, and later a football conference championship in 1975.

"He was my baseball coach in the spring and he was my quarterback coach in the fall. Most of my coaching style I learned from Mike," said Lyon, who has hired as head coach of the Cougars' resurrected football program in 1998 and led the team to a National Championship in 2004.

"Mike's passing is a tremendous loss for our Cougar family and the entire collegiate baseball community. The proud tradition and legacy he established at College of the Canyons helped establish a lasting foundation for our athletic department, and provided countless opportunities for thousands of student-athletes," Lyon said. "We wish to extend our deepest sympathies to the entire Gillespie family, and his many friends, colleagues and former students and players."

His teams produced 24 All-State selections and three California Player of the Year award winners. Former COC players Bob Walk (COC 1975-76), Shawn Barton (COC 1982-83) and Jeff Wetherby (COC 1983-84) all advanced to the major leagues after their time under Gillespie with the Cougars.

The three state championships were the first three such titles in the college's history. Gillespie's teams also finished as state runner-up in 1982 and 1985, making him the only California Community College coach to make it to five state finals in a six-year span.

"To be able to play for Mike Gillespie in that era, you had to be pretty tough," said former COC Dean of Physical Education & Kinesiology and Athletics Len Mohney, who won two conference titles in 1973 and 1974 as a player under Gillespie, and was later an assistant coach for 10 seasons, including the program's three state title runs. "But we had so much fun, everything was so competitive, it was just a blast."

"I worked with the best coach in the nation," added Mohney, who eventually succeeded Gillespie as COC's head coach beginning in 1987. "Mike respect­ed me, looked out for me and really took care of me like a dad."

Gillespie is one of only two head coaches in COC's 50-year history to win multiple state championships in their sport. The other is men's/women's golf head coach Gary Peterson.

"We lost a true legend of a person," said current COC baseball head coach Chris Cota, who played two seasons for Gillespie, including the 1986 state championship season. "Skip was not only one of college baseball's greatest, but also a mentor, teacher and role model to many.

"He was larger than life on and off the field. His players wanted to play hard for him," added Cota. "The impact he made on my career, as a player, coach, and person are immeasurable. It was not only an honor to play for him, but also to call him a friend. He will be missed."

Gillespie's teams finished with 20 or more wins in 13 of his 16 seasons at COC, alongside six 30-plus win seasons. His 1986 state championship squad recorded 41 wins, then the most ever by a California community college program.

Following the 1986 state title run, Gillespie returned to his alma mater to take the helm of the baseball programs at USC following the retirement of longtime head coach Rod Dedeaux.

Over the next 20 seasons (1987-2006) Gillespie posted a .618 winning percentage for the Trojans, going 763-471-2 and leading USC to the 1998 NCAA National Championship. Gillespie and the Trojans had previously finished runner-up for a national title in 1995. Along the way he also won five PAC-10 titles and coached a number of future MLB All-Stars including Mark Prior, Barry Zito, Aaron Boone, Bret Boone and Geoff Jenkins.

A former Trojans infielder/outfielder, Gillespie is one of only two individuals to both play for and coach an NCAA Championship baseball team. He was the leftfielder on USC's 1961 National Championship team.

After a 20-year tenure at USC, Gillespie briefly accepted the head coaching position with the Staten Island Yankees in the New York-Penn League before eventually taking the reins at University of California, Irvine, where he helped to reinvigorate the program.

In just his second season at UCI, Gillespie brought home the program's first Big West Conference title and guided the Anteaters to a No. 1 national ranking, the first in school history.

Over 11 seasons (2008-2018), Gillespie would amass 393 wins and lead UCI to five NCAA Regional appearances, including a trip to the 2014 College World Series. He was named National Coach of the Year for a second time following his team's run to Omaha that year.

He retired from baseball following the 2018 season.

A physical education major, Gillespie earned both his bachelor's and master's degrees from USC.
Gillespie is survived by his wife, Barbara, four children Mitch, Matt, Kelly and Tiffany and four grandchildren.

Gillespie at the 2007 Athletic Hall of Fame 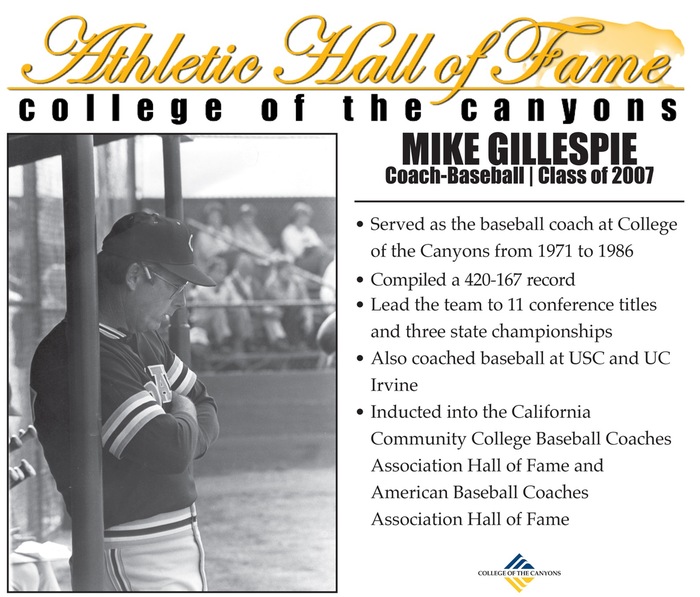