Zierer is just one of 17 CCCAA student-athletes across the state, and the lone football player, to earn recognition as a member of the Scholar-Athlete Honor Roll.

Scholar-Athlete Honor Roll award winners are selected for excelling both academically and athletically. Honorees must have participated in two seasons of sport, maintain at least a 3.5 GPA and display strong characteristics of citizenship, while representing the positive outcome of dedication, hard work and service.

Zierer graduated from COC after three semesters, earning a 3.73 GPA, an associate degree and a full athletic scholarship to the University of Auburn in the process.

Additionally, he was named one of the COC athletic department’s four Student-Athlete Academic Excellence Award winners for the 2019-20 academic year.

“Kilian is an impeccable student-athlete who attended class every day with a great attitude and a willingness to attack his studies just as vigorously as his athletics,” said COC head coach Ted Iacenda. “Never one to be complacent, Kilian pushed himself daily to reach his full academic and athletic potential.”

A native of Höhenkirchen-Siegertsbrunn, Germany, Zierer enrolled at Auburn for the spring 2020 semester. In doing so, he became the third Cougar to transfer to a Southeastern Conference (SEC) school since 2017.

Prior to the 2019 campaign he was named to the College Football America Yearbook Junior College Preseason Starting Lineup, one of just 10 players from CCCAA programs to be included in the preseason designation.

“What is most amazing about his success is that Kilian achieved all this while navigating the process of being an international student-athlete,” said Iacenda, pointing out the Zierer’s first extended visit in the United States began when he enrolled at COC.

“Making the commitment to travel to a foreign country, leaving behind all of his friends and family, struggling to overcome the language barrier and facing this entire journey on his own, only makes his accomplishments that much more impressive,” Iacenda added.

Zierer will be celebrated during the annual CCCAA Convention being held virtually March 30 to April 2. 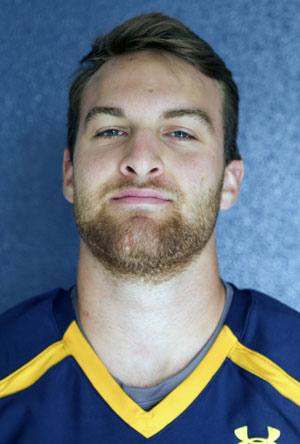