When Sarah Zamudio walks across the College of the Canyons graduation stage on June 3, she will be wearing a cap featuring a quote from the film “Up”: “Thanks for the adventure, now go have a new one.”

Zamudio’s COC adventure is culminating with three associate degrees, but it started in 2019 with a call for help.

Homeless and couchsurfing, the 19-year-old called her Bowman High School counselor, Ami Gonzalez, out of desperation.

“I told her, ‘I am on the street right now, I don’t know what to do. I need something to do with my life,’” recalled Zamudio. “Ami said, ‘You should go to COC. Just go. Now is the time.’”

Zamudio had stopped considering college as an option in the ninth grade, when her mother was diagnosed with Alzheimer’s and dementia.

“Going to college was a dream,” said Zamudio, who has been caring for her mother with the help of her father for the past 10 years. “It was like, ‘Ok, are you going to put your dreams first or what you need to do first?’”

But the strain of caregiving became too much for Zamudio, and it eventually caused a rift between her and her father.

“I wish somebody told me back then that it’s going to be this hard,” said Zamudio, whose mother stopped recognizing her three years ago. “I feel like every single month with the disease it’s a new thing that is gone.”

Now on her own, Zamudio took her counselor’s advice and enrolled at COC, where she learned about the college’s Extended Opportunity Programs & Services (EOPS).

The state-funded program, which provides academic and developmental services to students who face social and economic barriers, became a lifeline for Zamudio.

“That program has given me clothes when I had nothing, given me food when I was hungry, and given me an education when I had no way or means to pay for it,” said Zamudio. “Any time I ever needed something COC always had it.”

At COC, Zamudio found another guiding influence in Tony Law, an EOPS counselor.

“Tony has always been that person to just tell me, ‘Ok this is the plan, this is what you want to do. I’m going to make you that plan and you’re just going to follow it,'” said Zamudio.

With his help, Zamudio decided to pursue associate degrees in studio arts, psychology, and liberal arts and sciences with an emphasis in social and behavioral science.

‘Nothing about my situation is normal,” said Zamudio, who often felt guilty for going to high school when her mother was home alone.

During her first semester at COC, Zamudio sought free counseling every week.

“Sometimes I didn’t want to go, but then I would sit down, and the words would just start flowing,” said Zamudio.

As a result, her mental health has improved drastically. Still, sometimes simply being on campus can be triggering.

“In college you are supposed to be on your own, but I see all these parents, picking up their kids and coming to their games,” said Zamudio. “I don’t get any of that, but I figured, I’m not here for that. I’m here to learn. I’m here to study. Once I got that in my head, I never wanted to quit again.”

A typical day for Zamudio starts with carrying her mother out of bed to bathe and feed her. After dressing her and administering her medications, Zamudio waits for a caregiver to arrive and then heads to her on-campus job as an EOPS student ambassador.

An avid runner, Zamudio joined the college’s cross country and track & field programs, which gave her a sense of community and sanctuary.

As a freshman in fall 2019, Zamudio was a key contributor for the Cougars’ cross country team that advanced to compete at the CCCAA State Championship meet. Individually, her season was highlighted by placing 21st overall at the Western State Conference (WSC) Championships.

In spring 2020, with track & field season just getting underway, Zamudio was part of the class of Cougar student-athletes that saw their seasons of competition cancelled on account of the COVID-19 pandemic.

When the cross country team was eventually cleared to resume practices in the summer of 2021, Zamudio was the lone returner from the Cougars’ 2019 squad.

As the team’s only returner, Zamudio took on a leadership role for a group that once again advanced to the CCCAA State Championship meet, with the Cougars’ this time placing ninth overall. Along the way, Zamudio earned All-WSC Second-Team accolades.

“Sarah’s resilience paid off in the form of a trip to the State Championships,” said COC cross country and track & field head coach Lindie Kane. “Her role as a leader, mentor and role model to our incoming freshman was pivotal to our success.”

Even in the offseason, Zamudio runs daily, often during a two-hour break between classes.

“It’s the only time of day when I just feel like nobody can bother me,” said Zamudio. “It’s my meditation time.”

After her daily run, she heads home to prepare dinner for her family and begin studying. The next day, she wakes up and does it all over again.

“There have been a lot of times when I wanted to quit because it’s just too much,” said Zamudio. “But if I quit, then the disease wins. I don’t win. I’ve had millions of people ask me, ‘How are you still here? I say, ‘If I’m not here, then what am I doing with my life?’”

But when the pandemic hit in March 2020, Zamudio reached her breaking point.

“I didn’t have a job, I wasn’t working, I was really depressed,” said Zamudio. “I was trying to figure out if college is really something that I wanted to do. It was just one of those weak moments.”

In addition, her mother’s health took a turn for the worst when she was diagnosed with Parkinson’s disease.

Zamudio decided to take the semester off.

As the summer semester loomed near, Zamudio got some unexpected motivation from her father to resume her studies.

“My dad never went to college,” said Zamudio. “He tried but he flunked out. So, he said, ‘You have no excuse to be like this. You’re not flunking out. You didn’t fail. You just quit.'”

His words struck a chord with Zamudio, who immediately called Law to get back in school.

Back at COC with a plan in place, Zamudio hit the ground running.

Law remembers meeting with Zamudio after her short hiatus and noticing something had changed.

“She still had the same passion in running, the same excitement in her voice when talking about her future, but the one important difference I noticed was the confidence and mastery she has developed as a college student,” said Law. “As a first-generation student, I observed Sarah’s academic, personal, and professional growth when she started working as a student ambassador in the EOPS department. This is one of the goals of the EOPS program, which is to instill confidence and empower a student’s belief that they are able to achieve their educational, career, and personal goals.”

In the fall, Zamudio plans on transferring to the University of Washington to study art and continue running at the four-year level. She hopes to become a college counselor and art professor.

Zamudio has come to learn that it’s ok to put herself first.

“Looking back on it, I feel like I did have a choice, but I was so blinded by everything going on,” said Zamudio. “But there’s always a chance and a choice to put yourself first.” 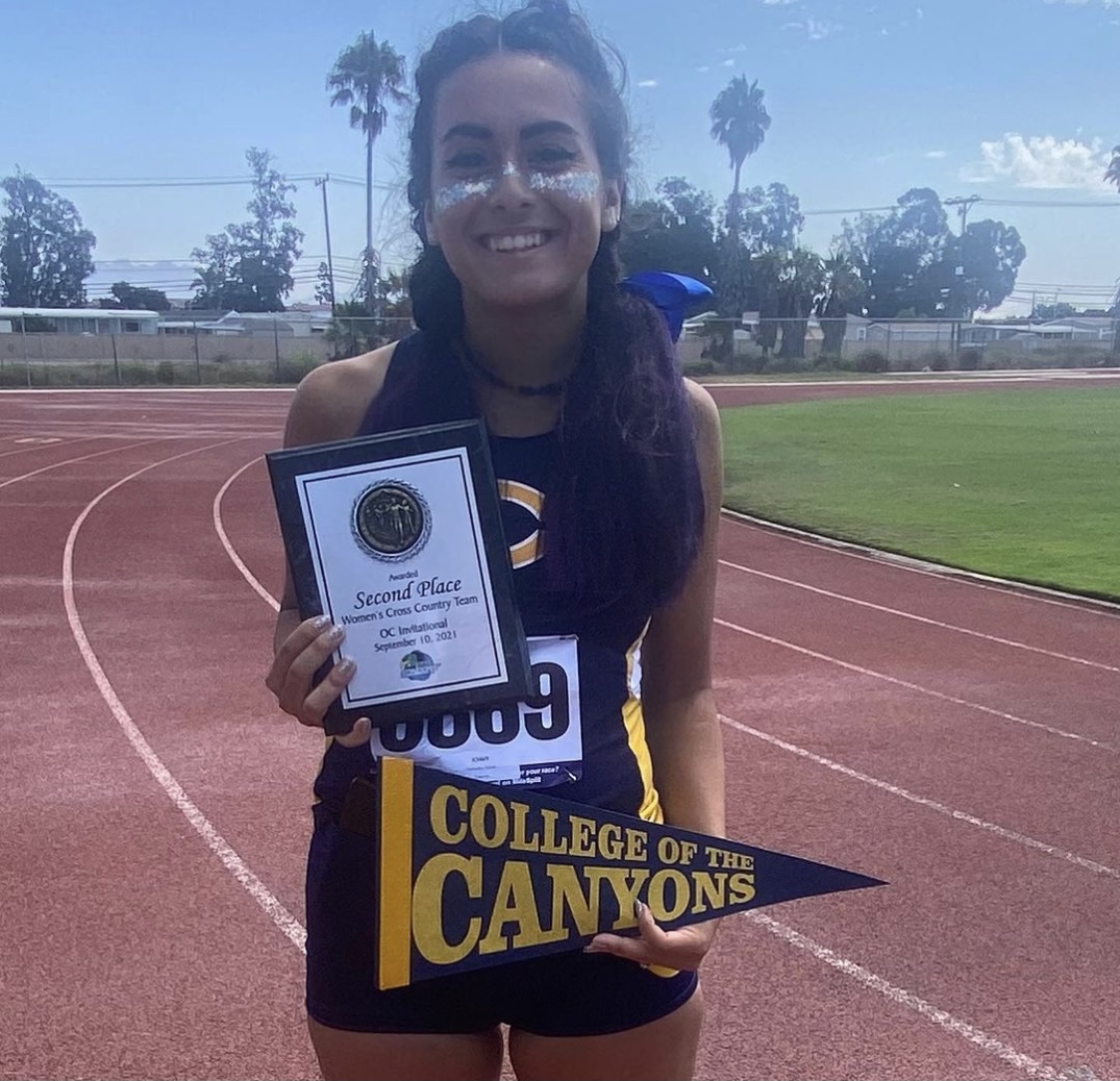