When April Barcus walks across the College of the Canyons graduation stage on June 5 to receive her associate of arts degree in paralegal studies and political science, she will be one step closer to beating that statistic.

“After foster care, I had been told so many times that I wasn’t going to make it that I kind of started to believe it,” said the 25-year-old, who is bound for Rutgers University in the fall.

By the time Barcus had aged out of the foster care system at the age of 18, she had lived in 30 foster homes and attended 22 high schools.

The constant moving took a serious toll on her schooling.

“I was basically a freshman in credits,” said Barcus. “I ended up dropping out for a year when I first aged out because I did not really know what to do and I had given up hope.”

After four months of intense independent study, Barcus earned her high school diploma and enrolled at Antelope Valley College while working up to four part-time jobs to make ends meet.

“I was completely on my own,” said Barcus. “Foster care doesn’t necessarily prepare you for becoming an adult.”

However, a year into her studies, Barcus was diagnosed with a heart condition, evicted from her housing, and experienced the sudden loss of her mother.

“Being an honor student in high school and going to college and getting a 2.0 GPA was embarrassing,” said Barcus.

Counselors began to dissuade from applying to UC schools because of her grades.

When her appeal for financial aid was denied to continue her studies, she dropped out of school.

“I felt like a failure,” said Barcus. “I just needed someone to believe in me.”

For Barcus, that first someone turned out to be Dora Lozano, a RISE counselor at College of the Canyons.

Barcus, who lives in Saugus, decided to start over at COC and met with Lozano to discuss her options.

“That was the first time someone had encouraged me, even though I was barely getting through college,” said Barcus. “I had given up hope. If someone had told me that sooner, I feel like it would’ve made a difference, because I had so much guilt and shame.”

When Barcus learned that she could have access to subsidy cards, counseling, financial aid, and access to on-campus resources such as BaNC, she felt relieved and hopeful.

“When I first met with April, I immediately recognized her tenacity,” said Lozano, who recalls being impressed by her organizational skills.

“I hadn't ever had a student or anyone in my life who was so copious about planning out their days, weeks, and months,” said Lozano.

Barcus—whose childhood dream was to become a lawyer—was especially excited to discover that the college had a certified paralegal program and a Cal-LAW Certificate of Achievement pathway.

“I figured paralegal would be a good way to get a foundation in law, to get my toe in the water and make sure I am actually going to like it before I go pay for law school,” said Barcus.

Barcus flourished at COC. Her grades went up and she became an active member of many campus clubs and initiatives, including RISE and the Multicultural Center. In 2020, she was voted Associated Student Government Public Affairs Officer.

A staunch advocate for foster youth, Barcus also serves as co-chair for the California Youth Connection and has worked on legislation to reform the foster care system.

Barcus’s decision to pursue law was further confirmed when her foster youth advocacy resulted in a trip to the California State Capitol. The day ended with a chance encounter with Senator Scott Wilk, R-Santa Clarita, who gave her a tour of the Senate.

While standing at the lectern, Barcus saw her future before her.

“I just realized, this is what I want to do, I want to be able to work in legislation and policy and just use the law for good,” said Barcus.

“From the moment I met April as a student in my class, she made a lasting impression upon me,” said Andrus. “April initiated an ongoing dialogue with me that covered politics, law and matters of social justice.  I was so impressed and frankly, surprised that someone so young could carry herself in such a mature and thoughtful manner.”

One day, Andrus introduced Barcus as one of his best students to a COC Board of Trustees member.

“That will stick with me forever,” said Barcus. “I felt like I was doing average [in his classes], so to hear that I am one of his best students, I don’t hear that a lot. I spent most of my life hearing that I couldn’t do things. So a compliment like that from a teacher I really look up to was huge.”

Lozano is proud of Barcus’s success, but is not at all surprised.

“April was already an amazing individual before she arrived at COC,” said Lozano. “I don't think we can take credit for April's greatness; we just provided the opportunities for her to demonstrate her exemplary skill sets.”

The fact that she will be attending Rutgers in the fall still feels very surreal, says Barcus, who chose the school to be closer to the United Nations and Washington D.C. for networking opportunities.

“I did it,” said Barcus. “I would have never guessed that I would get into Rutgers. I worked really hard. I just needed that hope.”

“I think it’s important for people who are struggling to know that it’s ok to take a break,” said Barcus. “You can still get into an amazing school and I wish someone had told me that when I was struggling.” 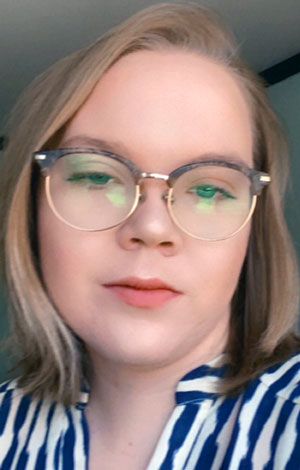